The service sector is usually ignored during the public debate on how to reduce Azerbaijan’s excessive reliance on resource revenues. When it comes to increasing the export potential even in discussions taking place in the research community, we tend to think of the development of material production, especially the processing industries and the agrarian sector. If we look at World Trade Organization (WTO) statistics on the global service market, it becomes obvious that the export of services had almost remained beyond the attention (other than travel and tourism). But, actually, travel and tourism account for 25-26% of global trade in services, while transport 25%, telecoms, computer and info 10% and business services 11%. According to World Trade Statistical Review 2017, world exports of commercial services totaled US$ 4.8 trillion, making up one-third of world merchandise exports (US$ 16 trillion) in 2016. Ten countries (USA, China, South Korea, Switzerland, Germany, Canada, Japan, India, Singapore, etc.) totaled 10 per cent of exports of commercial services. These economies constitute the lion’s share of exports of intellectual property-related services,[i] encompassing research and development (R&D) services, legal services, accounting, management consulting, public relations services, advertising, market research, public opinion polling services, architectural, engineering, and other technical services, waste treatment and depollution, mining services, trade-related services, and telecommunications, computer and information services. In addition, the share of financial services (pension and investment funds, services provided by banks and insurers) in world exports of commercial services have significantly increased in recent years.

This indicator for Azerbaijan was around 25 per cent in 2017.

It is worth noting that more than 70% of employment is provided through the services sector in developed economies. Therefore, the expansion of services exports plays a key role in developing and securing a stable economy through this sector in the country.

Alongside with the expansion of exports, the share of proceeds on exports of commercial services in total revenues generated abroad as part of the current account balance significantly also increased during the reporting period.

As can be seen above, the share of proceeds on exports of commercial services in total revenues generated abroad as part of the current account balance has significantly increased from 4.5% to 21.1% over the past ten years.  One of the reasons for this growth has been a two-time loss in merchandise exports after the oil price and oil output fall. At the same time, services exports also tripled amid declining merchandise exports. In 2017, the volume of currencies generated from services exports accounted for 30% of merchandise exports gains.  Azerbaijan’s demand for global services doubled, totaling US$ 8.1 billion in 2017 from US$ 3.9 billion in 2008 during the reporting period.

Spending on imports of commercial services in total repatriated foreign currency, as part of the current account balance is significant.

In 2008, the share of spending on services imports in total foreign currency paid to non-residents, as part of the current account balance was 21.9 per cent, touching 40 per cent in 2013 and beyond. Apparently, services imports are one of the major sources for currency outflows from Azerbaijan.

What statistics say: which services are dominant in services exports?

As can be seen from the chart, the diversification level of services by category is very low, with travel and tourism services accounting for 64.3 per cent and transport services 20.7 per cent of services exports. Thus, the share of the two branches in overall services exports is 85 per cent.

Tourism and transport services exports amounted to US$ 3 billion and US$ 971.3 million, respectively, during the year.

The share of travel and tourism in Azerbaijan’s commercial services exports grew to 64.3 per cent in 2017 from 12.3 per cent in 2008, while the share of dropped to 20.7 per cent from 51.2 per cent over the reporting period, with the share of communications, construction and finance sectors totaling US$ 259 million (6%).

Notably, some 80 per cent of tourism services exports is provided through these countries –Georgia, Russia, Turkey and Iran. It shows that the geography of Azerbaijan’s service exports is poorly diversified, more than 50% of service exports falling to the share of the four neighboring economies.

Unlike services exports, the level of concentration of services imports is not so high. 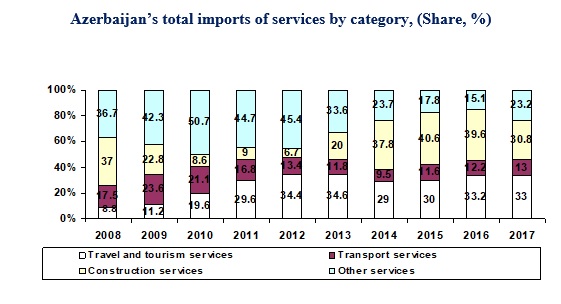 In 2017, travel and tourism had the highest share (33%) in commercial services imports, whereas construction and transport services accounted for 30.8% and 13%, respectively. Tourism, construction and transport services (rendered to non-residents) amounted to an estimated US$ 2.7 billion and US$ 1.1 billion during the year. Their share in aggregate overseas payments accounted for nearly 77%.

As can be seen from the figures, the share of travel and tourism in Azerbaijan’s commercial services imports was 8.8% in 2008, significantly rising up to 33% over the next 10 years.

Share of oil and nonoil sectors in the global services market

Despite oil sector has accounted the dominant share of Azerbaijan’s merchandize exports (more than 90%) for many years,  the role of nonoil sector in exporting commercial services has been critical. Oil sector had not contributed to service exports until 2015.

Unlike exports, oil sector has a substantial share in services imports, showing growth from 2011.

As can be seen from the statistics above, the share of oil sector in imports of commercial services significantly fell from over 50 per cent in 2008 to 27.9 per cent in 2011. There had been a surge in the demand for services in oil sector from 2012, growing by 41.5 per cent in 2017. Commercial services imports in value through the oil sector stood at USD 3.4 billion in 2017. The lion share in oil sector’s imports of commercial services belongs to construction and business services. In 2017, for example, out of US$ 3.351 billion in services imports within this sector, US$ 905 million and US$ 2.446 billion, accordingly, came from business and construction services. Thus, 90 per cent of the deficits in the balance of services has been attributed to oil sector. In 2017, oil sector exported services worth US$ 250 million, while imported services at US$ 3.4 billion, resulting in the deficits in the balance of services to the extent of US$ 3.1 billion. Moreover, the deficits in the country’s aggregate balance of services did not exceed US$ 3.3 billion. This alarming fact illustrates that oil sector channels USD 3-4 billion to meet global services through foreign-exchange earnings generated from merchandise exports.

Commercial services exports have been poorly diversified. In 2017, one sector (tourism) accounted for almost two thirds of total exports, whereas two sectors (tourism and transport services) accounted for 85%. The share of finance, communications and business services is scarce. Underdeveloped education, health and ICT sectors have hampered the country to become merely a player in regional exports of commercial services.

It is a positive outcome that the volume of Azerbaijan’s services exports has tripled over the past ten years, but the bulk of the growth was recorded in 2008-2012, with an average annual growth of 2 per cent recorded in the last four years.

Exports of commercial services not only have expanded, but also there has been a surge in the demand for global services in the national economy over the past ten years. The volume of Azerbaijan’s service imports almost doubled, from US$ 3.8 billion to US$ 8.1 billion between 2008 and 2017.

The value of Azerbaijani commercial services exports never surpassed that of commercial services imports during the last period and consequently, this economy become a net importer of services. The country has seen the deficits in the balance of services over the past ten years, varying between US$ 2.6 billion and US$ 6.1 billion.

Three service lines are predominant, with transport, construction and tourism sectors representing over 75 per cent of Azerbaijan’s services imports.

What is the potential of limiting the outflow of money from the country through this channel due to an increase in exports of commercial services and significant reduction in the service balance of Azerbaijan? Underdeveloped education (including science), health and business sectors are the bottlenecks for the country to export these services in the near-term. Moreover, its expanding tourism sector could boost exports of services. But first of all, this sector should be able to compete with Turkey’s and Georgia’s two largest Turkic-speaking countries, thanks to improving the quality of tourism infrastructure and creating favorable prices. Nevertheless, this sector should first be able to compete with at least two tourist destinations in the region – Turkey and Georgia, improving the quality of tourism infrastructure and offering favorable prices.

One more important field the government looks at is the transport sector. Especially, with the establishment of the port of Alyat, it is hoped that Azerbaijan will become a transport hub for transit flows from China and Europe, but Azerbaijan has to compete with Kazakhstan, Iran and Russia in this sector. Because of its shorter distance from Azerbaijan, the Kazakhstan-China route is a competitive advantage. According to experts, however, transporting goods from Europe to China and back– crossing through Georgia, as well as both the Black and Caspian Seas is at a disadvantage to the Russian route, as flows crossing Russia and Belarus go to Europe through the overland route. Although the overland route is longer than the sea route, it faces no risks, such as extreme weather conditions affecting ships in winter period, etc.

In any case, it will be possible to observe how Azerbaijan will become a more favorable transport hub at the crossroads of the China-Europe transit flows, compared to other international trading routes, in five years into the future. Even under the most optimistic scenarios for growth, Azerbaijan can compete for about 20 mln tons of overland transit by 2035, which gives ground to conclude that the revenue from such a volume of this route will not be able to absorb a large deficit on the country’s balance of services.

[ii] All data on exports and imports by country taken from IMF Balance of Payments Statistics. Access this link to see the report: http://data.imf.org/regular.aspx?key=61468205

[iii] All data on exports and imports for Azerbaijan taken from Central Bank of Azerbaijan’s Balance of Payments Statistics. Access this link to see the report: https://www.cbar.az/lpages/statistics/external-sector-statistics/

Is the Political Status of...

The question of the political status Nagorno-Karabakh has been at the centre of the conflict...

Overlooked Youth: How Does National...

Brief Study Report[i][ii] Through decades drug use has been one of the most stigmatized...

A Response to Murad Ismayilov's...

In an opinion concerning the recent radicalization of Muslims and the emergence of the Islamic...

The internet now has as much strategic importance as other media in Azerbaijan. Internet usage...