received his Bachelor's degree in Finance from Azerbaijan State University of Economics and his Master's degree in Economic Policy from Istanbul University.

The per capita wealth index is the sum of four components: natural resources, physical capital, human capital, and net foreign assets. The value of natural resources includes the value of all available natural resources in a country. Physical capital refers to man-made fixed assets (buildings, structures, equipment, devices, etc.). Human capital, meanwhile, is calculated based on the discounted (the present value of the amount to be paid — or received — in the future) income generated by people of working age over the course of their life. Net foreign assets are equal to the ratio of non-residents’ liabilities in Azerbaijan to residents’ liabilities abroad.

Human capital consists of the knowledge, skills, and health that people accumulate throughout their lives and ensures the realization of their potential as productive members of society. Investment in nutrition, health care, quality education, jobs, and skills contributes to the development of human capital, which is essential for building more inclusive societies. This study assesses the state of human capital in Azerbaijan and the government’s efforts to develop human capital in three areas: education, health, and social protection and labor. The assessment identifies the factors that promote and hinder the formation of human capital.

This study stresses that the quality and relevance of education in Azerbaijan are lower than expected, and particularly that educational inequalities were found. According to the results of the PIRLS study conducted in 2016, Azerbaijan has the largest gap between high-scoring and low-scoring students of all the countries of Europe and Central Asia (ECA). According to the study, students from rich families scored 96 points higher than those from poor families on a 700-point scale. (This difference is estimated at three academic years.) The scores of students studying in urban areas were 48 points higher than those studying in rural areas.

Graph: Levels of net involvement in education by level 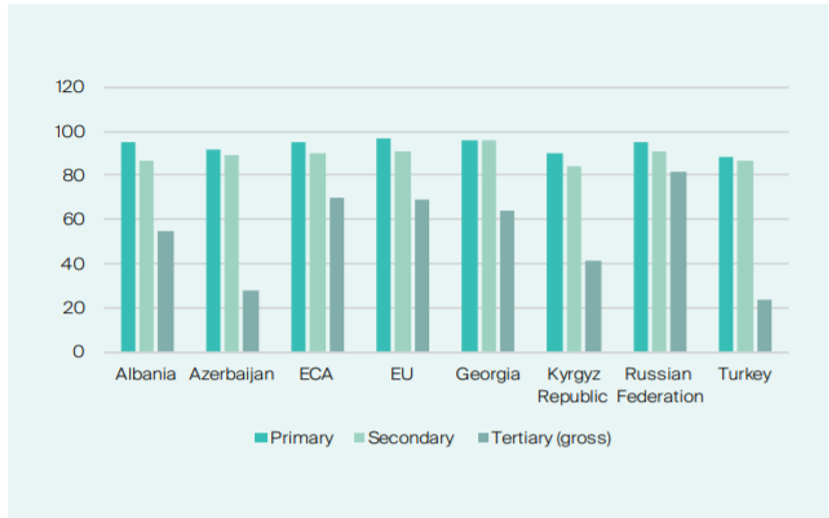 Another point worth noting is that Azerbaijan has one of the lowest rates among neighboring countries of involvement in preschool and higher education. According to the Statistics Committee, in Azerbaijan the number of citizens aged 15 and over with a higher education is 134 per 1,000 people. This is almost twice lower than both the regional average and the world average. A document prepared by the government entitled The State Strategy for the Development of Education in the Republic of Azerbaijan also states that the composition of graduates of higher education institutions does not meet the needs of the economy and there is a shortage of skilled labor in the private sector.

Another weakness of Azerbaijan on the Human Development Index in terms of education is the lack of strong links between higher education institutions, which stimulate research and innovation in many other countries, and the economy. Azerbaijan’s higher education institutions have very little potential to stimulate entrepreneurship and business development. According to this study, one of the reasons for this situation is that Azerbaijan spends less on research and development than any other country of the same population size. Azerbaijan spends only 0.2% of GDP on research and development. On the other hand, limited competitive financing opportunities are among the factors hindering the development of the sector.

The study also found that 78.6% of health expenditures in Azerbaijan are paid for by the population out of pocket. However, the World Health Organization (WHO) recommends that this figure be limited to 20%. It should be noted that the establishment of an effective management system in the health care system and the creation of conditions for early detection of diseases can make an important contribution not only to improving health outcomes, but also to reducing public spending. 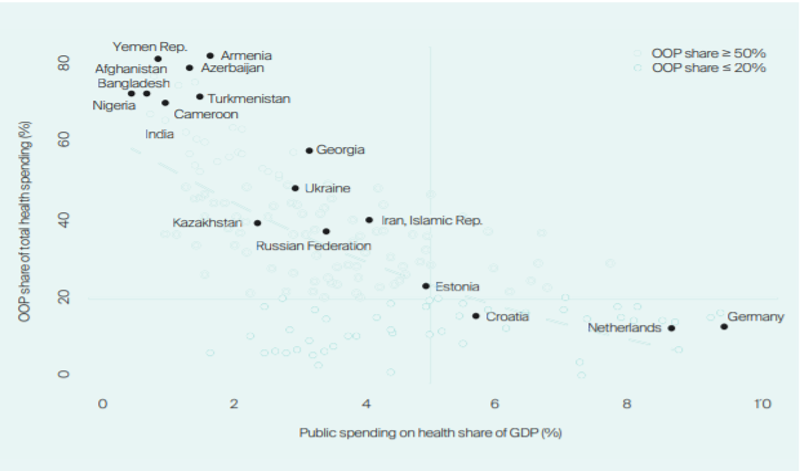 As with education, there are differences in health indicators dependent on income levels. Among the wealthiest 20% of families only 16% of children were stunted, but among the poorest 20% that figure is 33%.

Along with the level of income, there are significant differences in the quality of medical services between Baku and the regions. Although the number of qualified doctors per 10,000 people is 92 in Baku, this figure is less than 20 in the regions, or five times lower than in the capital (excluding a few cities and the regions of Gazakh and Barda).

Assessing social protection and labor in Azerbaijan, the study states: “Since the early 2000s, Azerbaijan has made remarkable strides in reducing poverty as a result of high economic growth rates, rising employment, and pension transfers. However, policy issues in social protection and labor are limiting Azerbaijan’s growth potential. Despite the significant and steady reduction in poverty, a large share of the population remain clustered just above the poverty line and are vulnerable to shocks, and large spatial disparities exist. Furthermore, while Azerbaijan has made significant progress in improving its business environment, limited access to viable financing for small to medium-size enterprises, restrictive trade regulations, and a lack of good governance is impeding firm growth and job creation. The participation of youths and females in the labor market is also very low, suggesting that Azerbaijan is not using the full potential of its workforce.”

In order to make progress in areas with the potential to influence the development of human capital, various policy and incentive mechanisms and proposals in specific areas can be suggested. However, research on the state of human capital in Azerbaijan shows that many of the problems stem from serious socio-economic inequalities between different social groups and regions.

These inequalities can even be seen in the official statistics, the comprehensiveness of which is often a subject of debate. According to 2015 figures, with a national income of about 53 billion AZN, 10.5 billion AZN (19.8%) goes to workers for their labor, 4.5 billion AZN (8.4%) goes to the government as production and import taxes, and 38 billion AZN (71.8%) goes to entrepreneurs and property owners as gross profit (mixed income). Gross profit here includes rent from property leases, interest from securities and deposits, and retained earnings from business activities. Entrepreneurs and property revenues, therefore, account for about 3 out of every 4 AZN of national income, and employees and the state budget account for only 1 AZN. In countries such as Sweden, Switzerland, and Germany, however, about 50-55% of national income goes to workers.

The most important steps to be taken to make progress in areas impacting human capital in Azerbaijan are economic measures, such as expanding access to finance and opportunities to operate freely for small and medium-sized businesses, supporting free import and export operations, and creating a progressive tax system, as well as institutional measures, such as legalizing the shadow economy, reducing administrative interventions, increasing economic freedoms in general, and creating a competitive economic environment. By allowing everyone to do business, it is possible to avoid the monopoly of a small privileged group, as well as to create conditions for employees to receive fair wages in a competitive environment.

Although certain programs have been implemented in Azerbaijan in recent years for the socio-economic development of the regions, there are still significant differences between Baku and the other regions in the formation of economic revenues and value. In 2019, the Absheron Peninsula accounted for 73% of total output and about 90% of industrial output. Unfortunately, these inequalities are also reflected in the distribution of funds spent. Last year, 73% of fixed assets in Azerbaijan went to the Absheron Peninsula. In other words, about 3 out of every 4 AZN of fixed capital is spent on 7% of the country geographically.

Public funds can have a significant impact on reducing socio-economic disparities between regions and developing human capital. However, new approaches to regional development are needed to achieve better results. Along with economic measures, such as various incentives and discounts, there is a need for institutional changes, such as increasing the revenue streams and powers of municipalities (local elected self-government bodies), creating a more comprehensive regional governance policy, and implementing these measures with transparency and accountability.

It should be noted that such measures should be taken not only in the field of regional governance, but also in other areas. Household spending on education and health care contributes significantly to human capital formation. However, not all families have the means to allocate sufficient funds. Steps should be taken, therefore, to make public-funded projects more purposeful and effective.

In summary, efforts aimed at the development of human capital can be directed at two different areas. The state must increase the efficiency and effectiveness of its projects and investments, increase transparency and accountability in these activities, ensure the participation of stakeholders, and create conditions for citizens to freely participate in economic activities in a competitive environment. Then favorable conditions can be created for both the increase of people’s socio-economic well-being and the development of human capital.

At present, one of the main economic goals around the world is to achieve sustainable economic development. One of the most important conditions for sustainable economic development is human capital. One of the biggest challenges facing the Azerbaijani economy today is to diversify and reduce resource dependence. In overcoming this problem, Azerbaijan’s largest resource may be human capital, but only if fertile conditions are created for the formation and realization of human potential. Currently, human capital accounts for only 14% of wealth formation in Azerbaijan, and the fact that children born in Azerbaijan today, enjoying a good education and good health, can be only 60% productive, is an indication of serious challenges. In order to overcome these problems and achieve sustainable economic development, it is essential to analyze the government’s performance in areas that affect human capital formation and to develop more effective approaches.

The Social Protection of Mothers...

Securing an effective social protection of children under the age of 18 is a strategic...

Regional Differences in Housing: A...

An analysis of the long-term trends in the dynamics of the housing stock is interesting...

According to the World Bank's report The Changing Wealth of Nations, human capital accounts for...

Muharram commemorations in the southern...

Local Shi'ism existed in the southern regions of the Azerbaijani republic, and particularly as concerns...

A Reply to Vicken Cheterian’s...

In his article, Vicken Cheterian analyzes the political messages from Azerbaijan after the war and...

How should self-government be established...

The Azerbaijani government began work to restore life in the territories liberated in II Karabakh...

What do you really know...

Vladimir Putin is in his last presidential term, but nobody expects that after his term...

The oil and gas sectors in Azerbaijan have boomed since the end of the Soviet...

On the Prospects for Normalization...

On 3 April 1993, in a protest against the occupation of Azerbaijan’s Kalbajar region by...

Unsurprising Election: What Does the...

Iran’s 13th presidential election ended without a surprise. As most observers predicted, the 60-year-old head...