One of the important conditions for sustainable and balanced development is interregional economic balance. However, this cannot be applied to Azerbaijan, as the situation there is complex. The problem there is not limited to the disruption of economic balance between regions because of various historical, socio-cultural and political factors. The country has been divided into two very different poles, based on the level of socio-economic development. On one hand is Baku and Absheron Peninsula, which make up only 5 percent of the country’s territory, but 75-80 percent of its economic potential, while on the other is the regions, that comprise 95 percent of the territory, but only 20-25 percent of the economy.

Socio-economic differences between the capital and other regions of Azerbaijan grew especially bigger after the big flow of oil revenue into the country in the beginning of 2000s. Although the government had made regional development one of its main priorities in that period, it has adopted only 3 state programs in that direction  between 2004-2018. During that period, social, utility, communication and transportation infrastructures improved significantly, but it was not possible to eliminate the differences in economic development (i.e., creation of national income, establishment of the state budget, acquisition of export revenues, etc.). The main reason is that improving infrastructure requires large investments.  According to various estimates, more than 60 billion dollars have been invested in the regions in the past 15 years and a significant portion of this amount has been spent on infrastructure projects. It is true that quality infrastructure provides the population of regions with equal access to basic goods and services. However, availability of investment opportunities that meet the needs of an area is not enough for its economic development. Examples of successful regional development show that, balanced regional development requires a business environment for closing the huge economic gap between the capital and the regions. But forming a business environment is difficult in the absence of local self-government systems, capable of making prompt economic decisions.

The government of Azerbaijan releases an annual public report on the implementation of the regional development programs. However, these reports do not contain any information either about differences in socio-economic development between the capital and regions, or differences within the regions.  So what are these real differences? The available statistics do not offer any answer to this question. For example, there is no information in the open data sources regarding export volumes, poverty level, and the utilities usage in individual regions. Thus, in this article we will be exploring the scale of socio-economic differences between the regions and the capital, based on the information that is available.

Differences in the level of product and services production

The official statistics do not include Gross Domestic Product (GDP) of any region, except for Baku. But there is information about gross output of all administrative and economic regions, which is, in fact, an important indicator of the differences between the economic potential of the regions. The value of gross output was 77.6 billion manats in 2017. Baku accounted for 55.4 billion manats or 71.4 percent of it, whereas the Greater Baku region, which includes Sumgait city and Absheron is responsible for 57.7 billion manats, or 74.4 percent of the gross output.

Contribution of Baku and regions to the gross output (2017)

But since the State Statistical Committee calculates the GDP of Baku, it is easy to extract the share of other regions in the total Gross Domestic Product of the country from that information. The overall GDP in 2016 was 60.4 billion manats, and 76.8 of it was produced in Baku. Thus, only 20 percent of GDP can be attributed to goods and services produced in other regions (excluding Sumgayit and Absheron). This sharp difference between the capital and the rest of the country is clearly reflected in the GDP per capita as well.

The difference between per capita GDP in Baku and other regions is 11.5 times.

The share of Baku’s contribution to GDP in some sectors of the economy is even higher. This is especially true in manufacturing, communication and transportation industries.

Contribution of Baku and regions to GDP, by industry (2016)

Differences in contributions to the budget

Regions make minimal contribution to the state budget. According to budget fulfillment report of 2016, 3.2 percent or 562.9 million manats of the total budget revenue of 17.5 billion manats account for the taxes collected in the regions outside of Baku. Baku and the rest of the country contribute 94.5 and 5.5 percent to the state budget, respectively. This number excludes transfers made from the State Oil Fund.

Share of Baku and other regions in fixed capital investment (2016) 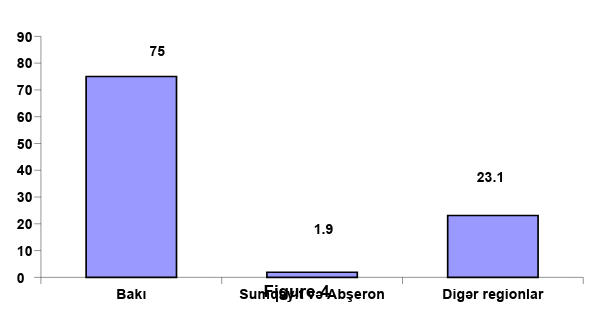 Contribution of regions to exports

There is no information regarding the input of different regions to export volumes. Yet it is possible to tell the difference between the contributions of Baku and other regions to exports by looking at the commodity structure of foreign trade. For example, total value of exports was 13.8 billion dollars in 2017. Total value of oil and oil products, as well as petrochemical and metallurgical industry products produced in Baku and Absheron peninsula was 12.3 billion and 400 million dollars, respectively. These commodities alone accounted for 92 percent of total exports. The share of the regions (outside of the Absheron peninsula) in the total exports was less than 5-6 percent, and their products come mainly from the agricultural sector. This excludes the export value of products of big food companies that have their production facilities in Baku.

Total volume of credit investments amounted to 11.6 billion manats at the end of 2017. 83.6 percent or 9.7 billion manats and 3.9 percent (449.5 million manats) of that amount is provided to Baku and Absheron, respectively. Thus, only 12.5 percent of the total credit is lent out to the rest of the country.

Differences in the supply of public utilities

Official statistics indicate that 99 percent of all residential areas in Baku are connected to water supply systems, 96.4 percent to sewage systems and 96.4 percent to natural gas delivery systems. The level of supply of utility services to Sumgayit, Ganja, Mingachevir and Shirvan is similar to that of Baku. 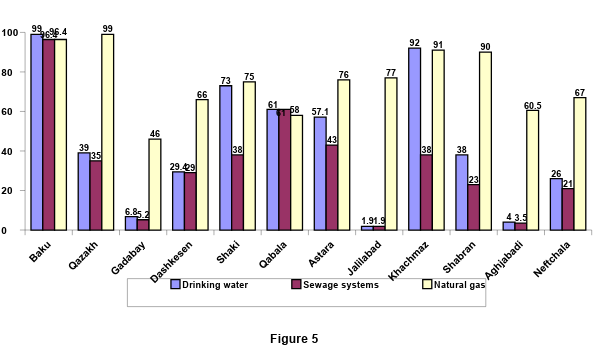 As we can see from the diagram, the level of utility services provided to many regions dominated by rural areas is considerably lower than in Baku. More than 1 billion manats have been allocated to providing more people with natural gas in the past ten years. As a result, the ratio of the population provided with utility services fluctuates between 49-95 percent, depending on the region. Supply of drinking water through a centralized network differs across the regions. The lowest ratio is 2-10 percent in Gadabay, Agjabadi, Jakilabad, etc. These numbers are even worse when it comes to sewage systems in the regions. The official statistics show that in 18 out of 60 rural regions this number is below 20 percent, while in other 32 regions it is less than 40 percent.

Differences in the social services

The main difference in the provision of social services between Baku and other regions is reflected in the number of doctors. In Baku, there are 89 doctors per 10,000 people, while in places like Lerik, Yardimli, Samukh, Dashkesen, Gadabay, Goygol, Quba, Shabran, Ujar, Zardab, Kurdamir and Hajigabul that number is between 6-10. Overall, in 48 of 60 regions, there are less than 20 doctors per 10,000 people. This number is on average 5 times lower compared to Baku.

The rate of preschool enrollment in Baku is around 20 percent, which means that 40 thousand out of approximately 200 thousand children aged 6 and younger are enrolled in preschools.

But only 80 thousand of 900 thousand kids aged 6 and under in the rest of the country are receiving preschool education, which means that the rate of preschool enrollment is twice higher in Baku than the regions.

The number of landline phone services provided to the population is considered an important indicator, taking into account the fact that a significant part of the population cannot yet afford mobile communication services. According to the official statistical information, the number of landline phones per 100 families is 120 in Baku, while in other regions this number varies between 20 and 60. There is no information in the official statistics about the level of broadband Internet access in the regions. However, the difference between the number of landline phones per 100 families in Baku and other regions shows, that the population in the regions has 3-4 times fewer resources for accessing broadband Internet than in the capital. Moreover, residents of Baku pay 93 percent of the overall communication service fees, which is another indicator of the differences in the level of communication services usage.

One of the important conditions for sustainable and balanced development is interregional economic balance. However,...

On the Mir Jafar Bagirov’s...

The main opponents of Stalin within the Bolshevik party, and the potential opposition in general...

Introduction The true purpose of humans is to develop their abilities in the highest...

The Azerbaijani Banking Sector During...

As it was for other sectors of Azerbaijan’s economy, 2020 was full of hardships for...

Why is it important to...

Regardless of whether or not the elections are free and fair, it is important for...

Iran Torn Between Armenia and...

The revival, on Sunday, September 27, 2020, of the Nagorno-Karabakh conflict naturally provoked the reaction...

On Illegal Authority of Departments...

While the Soviet model has been renounced in many areas of property relations in Azerbaijan,...

We are entering a new era, the details of which we can not yet fully...

Regional Differences in Housing: A...

An analysis of the long-term trends in the dynamics of the housing stock is interesting...