According to Michalski & Stoltz the traditional approach maintains that governments strategically lie to the public about economic information. The figures of the budget deficits  Greece and Italy were accused of having before entering the Eurozone are a good example. Argentina is also suspected of underreporting inflation since mid-2007. A leaked statement by the Hungarian government revealed that the minister had lied to the public about the state of the economy in order to win the 2006 elections. Ukraine misrepresented its level of reserves to the International Monetary Fund from 1996 to 1998. China is believed to embellish its GDP growth numbers. Even the United States has come under scrutiny after GDP growth revisions continued to be negative in the wake of the crisis that began in 2008. Sometimes governments are caught red-handed (such as in Hungary or Ukraine), but it is often unclear whether the information provided to the public is inaccurate (either through measurement errors or poor data collection methods). We do not know whether they suffered intentional changes. In some cases, misinformed economic agents, such as Argentina, misrepresented inflation figures and avoided paying higher interest rates on inflation-linked government bonds (which in fact should have been partially defaulted) and public sector wage increases. Greece is a member of the Eurozone and since investors are unaware of all the difficulties of the Greek budget,  the government has been able to borrow at low interest rates (close to Germany). Considering these examples, two important questions arise: 1) is it possible to find cases of countries or groups of countries providing misinformation, and do these countries have anything in common?

Michalski and Stoltz (2013) use a statistical test based on the distribution of the first digits of economic accounting (also known as Benford’s law) to check whether countries have falsified economic numbers. Benford’s distribution of first numbers naturally arises for many different types of data. This is true for processes that are products of exponential growth or the multiplication of independent random variables; i.e. in applications, the presence of stochastic shocks in a lot of economic data due to inflation, economic growth, or population growth demonstrates Benford’s law. This feature is protected via multiplication by a common factor and survives without being converted to different scales. This distribution arises when data is obtained that is considered in conjunction with many different economic processes (or from many countries). From here, deviations from Benford’s distribution may indicate data breaches (Michalski and Stoltz 2013).

Michalski and Stoltz (2013) use quarterly balance of payments (BoP) data from the International Monetary Fund (IMF) for 1989-2007 in their tests for several reasons. First, this accounting information is available for many countries from the same source. Second, it is common for countries to misrepresent such specific information when they are either caught (Ukraine) or suspected (Russia, Gambia, China, Chad, Sierra Leone, Egypt, etc.). The first digits of each balance of payments entry must be in accordance with Benford’s law itself; and data from many countries (when heterogeneity is applied) should be consistent. Moreover, the data is somewhat standardized (between countries and over time). It is developed (classified) by providers in accordance with IMF guidelines. Thus, they offer more data points and observations than other information on economic bases. In addition, the indicators are not converted to different scales (if the balance is denominated in US dollars), which is something that could worsen the statistical characteristics of the data. This data includes information that is closely monitored by investors every three months, which is an incentive for countries to distort them. Naturally, the tests could be extended to other types of macroeconomic data (such as unemployment or inflation); but the size of the task is already significant enough for the data available (Michalski and Stoltz 2013).

First, Michalski and Stolz put forward theoretical arguments and review the literature on why economic processes must comply with Benford’s law. Then they show for all the data that we can’t deny Benford’s distribution of first digits. Before testing the data more closely, they develop a simple model (taking into account the characteristics of our data set) that informs them and gives them an idea of ​​when countries will strategically misinform investors (economic agents). The story is very simple: a country may want to hide its true position in order to prevent capital inflows from abroad or to encourage inflows. Then the authors group the countries into different categories and examine whether they can disprove the hypothesis that the first figures of the data provided by their models are distributed according to Benford’s distribution. Using balance of payments data, they find evidence that countries with stable exchange rate regimes, such as Azerbaijan, or countries with high foreign net assets and negative current account balances, have economic data with irregular, non-Benford behavior.

Benford’s Law is rejected by a group of countries that are more sensitive to changes in capital flows (i.e. countries with stable exchange rates and relatively high capital openness; countries with both current and fiscal deficits). The countries that have adopted the euro, as reported, have an unusual distribution of the first figures after entering the eurozone. According to the main results, it is not possible to include sub-Saharan African countries or countries with low institutional quality ratings. The rejection of the Benford distribution by the models for the first digits of data occurs only for certain groups and not for complements in the data set (e.g. for fixed exchange rate regimes such as Azerbaijan, but not for floating regimes or for countries with low net foreign assets and not for those with high net assets). The results of Michalski and Stoltz (2013) are consistent with the hypothesis of strategic manipulation of data in sensitive countries. These disclaimers are more country-specific, as much of the information falls into different categories for different countries.

Tests used are used by accountants to detect fraud in company accounts (see Nigrini [1999] for examples). Varian (1972) suggested using Benford’s law to test the naturalness of the data and the conformity of the numbers produced by the prediction models. As far as we know, there are two studies that have used the Benford distribution to check macroeconomic data so far. Nye and Moul (2007) provide evidence (and also simulations of economic quantities) using extensive use of international macroeconomic data, such as the Penn World Table and the GDP series, and show that they demonstrate first figures corresponding to Benford’s distribution.

In our article, we will examine whether Azerbaijan’s unemployment figures are in line with Benford’s law. In the previous literature, we talked about the fact that fixed exchange rate regimes like Azerbaijan can sometimes strategically present altered information. It is no coincidence that Azerbaijan is also found in the data set of Michalski and Stoltz (2013). 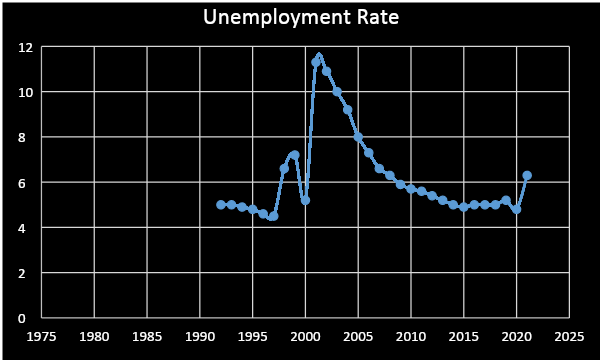 The chart above shows the official unemployment figures. There has been a steady decline since 2001. After 2020, a certain amount of growth is observed. Stability is observed between 2015-2019, but there has been an exchange rate crisis in recent years. We will check whether this data complies with Benford’s law. 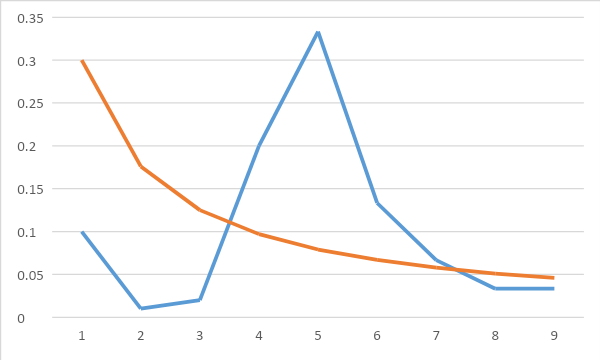 If we look at the chart above, we can see that the first figures in the official unemployment rate do not seem to correspond to the Benford distribution. In addition, we are doing a Z test. The Z test provides statistical similarity of distributions. 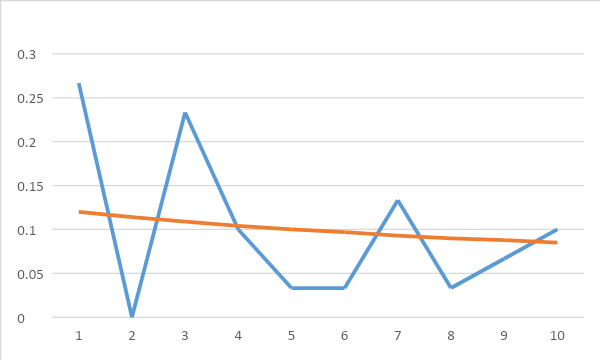 Although the second digits seem to be more legitimate than the first, we can’t say anything without testing the numbers.

As can be seen from the values of Z, the second figures also show inconsistencies with the Benford distribution.

Togrul Mashalli (2021) notes that official figures do not reflect reality and makes assessments for real data. He says, “The problem is that official statistics do not accurately assess the unemployment rate in two ways; firstly, they do not take into account all the people who are really unemployed, and secondly, they overestimate the number of economically active population.” Togrul Mashalli emphasizes that the unemployment rate for 2020 is 16.51%, not 4.86% as officially shown. If we take this figure as a basis and calculate other years, we will have different data sets. 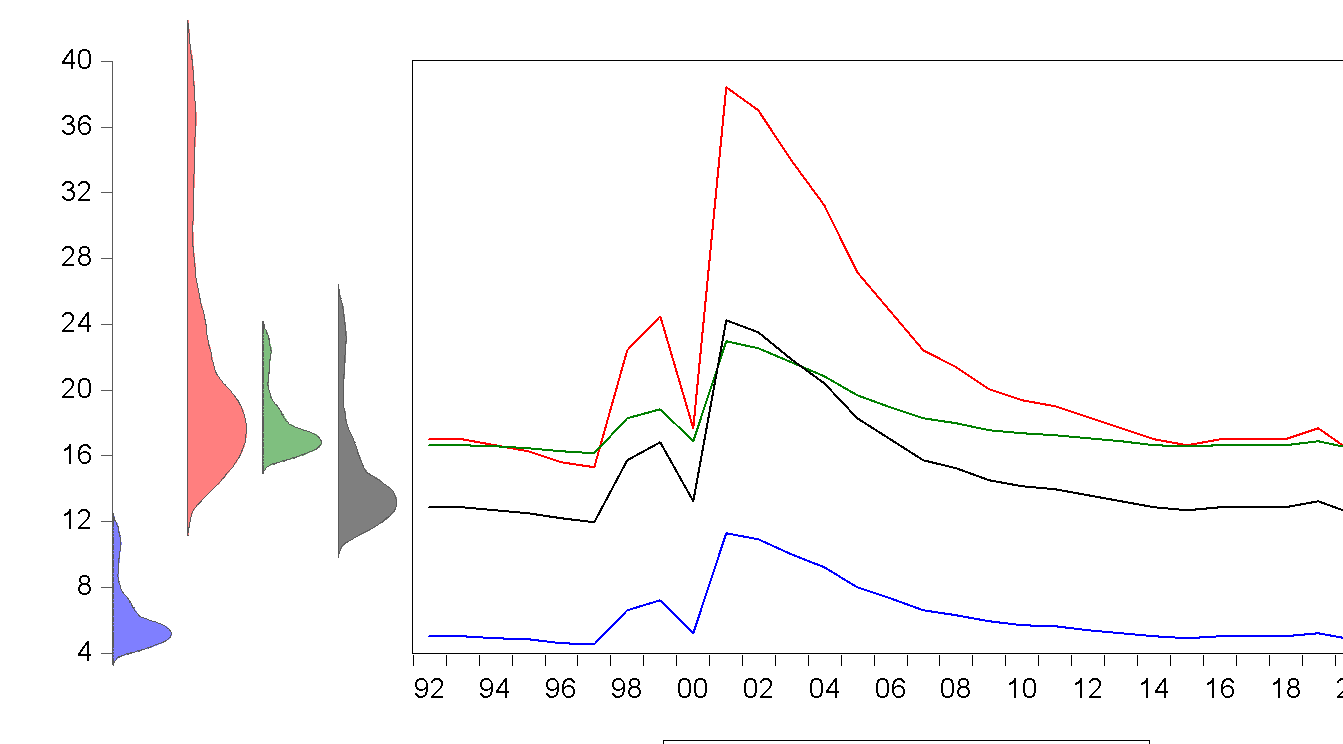 The above figures were obtained in three ways. The first method is that we are 11.65% above the official figures. The second digit is obtained by multiplying the official figures by 3.39. The third digit is the official number and the numerical middle of the other two. We get our figures from the ratio given by Togrul Mashalli (2021). We checked to see if the data sets we had obtained were consistent with the Benford distribution, and the data sets we obtained by multiplying them seemed more realistic. The table below shows this again.

The second digits of the figures we obtained also correspond to the Benford distribution. As a result, the figures we estimate differ from the official figures, as shown in the table below.

2. Nye, John and Charles Moul, “The political economy of numbers: on the application of Benford’s law to international macroeconomic statistics,” The B.E. Journal of Macroeconomics, 2007, 7 (1), article 17.

Natural Gas Prices: What Is...

In the second part of 2021, one of the main developments in the world economy...

On the night of November 9, 2020, a trilateral statement signed by the leaders of...

The end of 2018 will be remembered by yet another surge of rumors about the...

This article is a short biographical sketch of a Chechen politician, one of  the leaders...

Although the closure of educational institutions due to the coronavirus pandemic has excluded many students...

The Universalism of Human Rights...

Most of main legal comments on human rights law present concerning on the cultural context...

Azerbaijani Banks in 2018 (from January through September)   Contents   Introduction Changes in...

In recent months, the news from the Westminster Magistrates’ Court has been a major topic...