Regional Differences in Housing: A Fourfold Difference Between High and Low-Density Housing Regions in Azerbaijan

An analysis of the long-term trends in the dynamics of the housing stock is interesting in several respects. If the expansion of the housing stock in any region is rapid, it demonstrates first of all the attractiveness of the region for settlement. But, of course, this attractiveness is not only due to the region’s natural features. The availability of economic opportunities in the region (jobs and high wages, access to education and health infrastructure, quality transport and utilities, etc.) has a more decisive impact on settlement.

On the other hand, the economic viability of investing in real estate in a region also contributes to the expansion of housing construction. For example, in large cities where there is a great demand for rental housing, even non-residents invest in the housing sector. By the way, it is not only the opportunity to earn income that makes investing in housing in and around Baku attractive. Banks refuse to accept real estate in the regions of Azerbaijan as collateral — only apartments on the Absheron Peninsula have economic value in credit relations.

There is another important reason for the sharp regional differences in housing construction in Azerbaijan — the large scale of unofficial internal migration. For instance, many apartments in Baku, Sumgayit, and Absheron are owned by people who are registered in other regions. Regardless of the actual place of residence, official statistics reflect changes in the dynamics of the population by the location of their registration, while changes in the dynamics of the housing stock are reflected in the total area of new construction.

As a result, while the total area of the housing stock in the Absheron district expanded by about 140% in 2009-2020, this figure was 24.5% for the country and only 10-20% in some regions.[1] Undoubtedly, the number of people registered in other regions but settled in Absheron as well as the large-scale purchase of apartments by non-residents have affected this figure. Note the fact that, according to official statistics, between 2009 and 2020, the population of Absheron district increased by only 13%, while the housing stock was expanded by 140%.[2] However, during that period, in Dashkasan district, the housing stock expanded by only 2% despite an 8% increase in the population.

Indicators such as the number of apartments per 1,000 people, the difference between the number of inhabitants and the dynamics of housing expansion, and the structure of the housing stock by the number of rooms are very important indicators in terms of assessing regional differences in housing.

The difference between the regions in terms of the number of apartments per 1,000 people is slightly more than fourfold. The regions with the highest indicators are Absheron (553), Naftalan (289), Goygol (270), Ismayilli (265) and Ganja (261). The sharp difference between Absheron and even the other regions in the top 5 is most likely due to the high level of unregistered settlement in Absheron and/or the large number of non-resident apartment owners, as noted above. The lowest indicators are recorded in places such as Lerik, Yardimli, Gobustan, Jalilabad, and Imishli.

In 2015-2019, the number of apartments in the country increased by around 222,000 units or 11.5%. Approximately 130,000 (59%) of these increases were driven by Baku, Sumgayit and Absheron. As can be seen, the number of newly commissioned apartments in the regions over those four years was 30% less than those of Baku and the Absheron Peninsula. During this period, the highest increase in the number of apartments in the regions was in Ismayilli (29%), Ganja (27%), Goychay (23%), Gabala (17%), and Guba (16%), and the lowest increase was in Neftchala, Shamakhi, Ujar, Lerik, Agdash, and Dashkasan (1% in each), Samukh, Sheki, Beylagan, Agjabadi, Barda, Yevlakh, and Lankaran (2% in each).

Since the data on the number of apartments by region in open sources only covers the years between 2015 and 2019, that is the only period for which it is possible to follow the fluctuations. However, if there were information about the period before the arrival of large oil money (before 2005), it would be possible to see the differences in the housing supply of the regions created by that money. This information would also give some idea of the real level of internal migration from the regions to Baku and the Absheron Peninsula over the last 20 years.

Expansion of housing stock and population growth in the regions in 2009-2020, by percentage 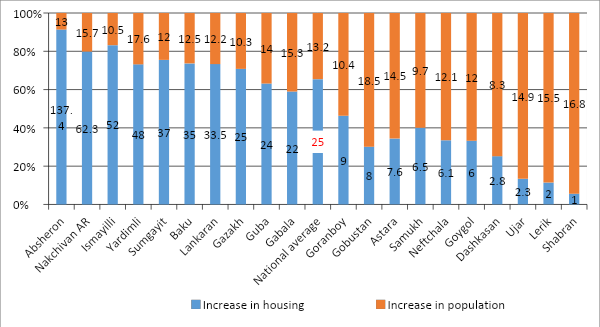 Regional differences in housing per capita

There is slightly greater than 3.5 times more residential space per person in some areas than in others. For instance, — this figure is 31.4 square meters in Absheron  but only 8.8 square meters in Samukh.

Residential space per person in the regions, square meters 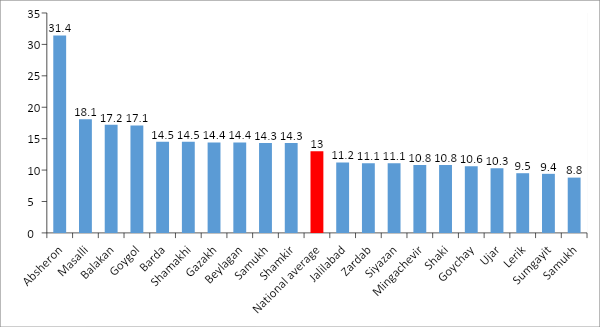 The number of rooms in the regions

Thus, a statistical analysis shows that there are significant differences between the regions when it comes to housing. These differences are primarily reflected in the number of apartments per 1,000 people – the gap is more than fourfold. Meanwhile, some areas boast about 3.5 times more residential space per person than in other regions.

This analysis also showed a very important trend: starting from 2015, the expansion of the national housing stock has been mainly driven by Baku and the Absheron Peninsula. The construction of housing in Baku, Sumgayit, and Absheron accounted for 66% of the total expansion of the housing stock in the country in 2015-2019. However, this geography makes up only 5% of the national territory. The fact that the Absheron Peninsula remains so attractive for housing construction shows that inequality in regional development will be difficult to overcome in the near future.

Science and Religion: Contradiction or...

The claim that religion and science are contradictory was put forward by John Draper[i] and...

Much of the research on income inequality, and livelihood rely on government labor and wage...

Excluding natural resources, tourism is at the top of the list of the priority sectors...

Conspiracy theories and the value...

Some methodological elements of the...

The subject of the research Turkey’s foreign policy has recently become increasingly ambitious in...

Disenchantment With the Past and...

This research paper seeks to explore the history of secularism in the Muslim-populated territories of...

Can the minimum wage meet...

A minimum wage is the minimum amount of remuneration that an employer is required to...