1.The survey objective and scope

It is crucial to study business expectations in terms of assessing the business environment in the country and forecasting a near-term perspective. To this end, an expert group at BRI has conducted interviews with 100 entrepreneurs in august-october 2018 from six economic regions of Azerbaijan and different sectors of the economy. Because of its test nature, fewer business subjects were involved in the first survey. At the next stages, much attention will be paid to surveying a large number of businesses.

41% of respondents were entrepreneurs from the Absheron economic region, including the capital city of Baku, while 21% were from Aran, 14% Guba-Khachmaz, 9% – Upper Karabakh, 9% Sheki-Zagatala and 6% Lankaran economic regions.

30% of respondents were engaged in industry, 24% in agriculture, 21% in services, and 22% in trade. Among the respondents, there were also entrepreneurs from the construction sector (2%), while 15% from the education, 12% tourism, and 8% from public catering sectors (see Figure 3). 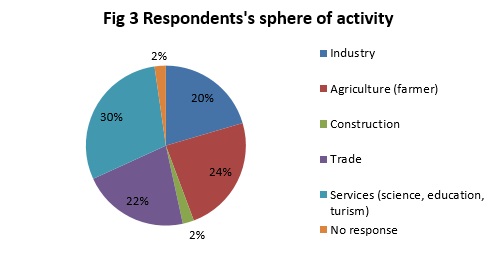 Sectoral analysis of the business found that the expansion of the business was most observed in the construction sector (100%). More than half (52%) of the agricultural sector and 46% of the service sector said that the situation changed positively. Approximately a third of the representatives from the industrial (39%) and trade sectors (37%) shared these views (see Figure 4-1).

Figure 4-1. The state of the business environment by sectors during the past year

Compared to other sectors, the trade sector has seen more shrinking of business (26%), while decreases of 19% were observed in the service sector, 16% in the industrial sector and 14% in the agricultural sector in 2017 (see Figure 4-1).

Figures 4-2. The state of the business opportunities by regions during the past year

Analysis showed that the employment has increased in the construction and services sectors during the past year, with 39% and 43% in the industrial and agricultural sectors. The least growth (26%) and the highest decrease (32%) in the number of employees was observed in the trade sphere. There was no decline in the construction sector, while decreases in industrial, agricultural and services sectors were 28%, 19% and 27% respectively (see Fig. 6).

Figures 5-1. The state of the business environment by sectors during the past year

Those who claim that the business environment has improved, explained it for a variety of reasons. 27% of respondents linked this improvement to the demand for products or services they sold. The second reason for this is the decline in inspections (18%) and improvement of tax relations (18%). And the responses also included – an increase in the transparency of the customs system (14%), the expansion of production (14%), the increase in the sales of goods or services (11%) as a positive step, while 9% of respondents reported a positive effect on the increase in government support and improvement of competitiveness, 7% on the e-government expansion and elimination of barriers. A small proportion of respondents (5%) indicated improvements in the formalization of documents and easier access to lending. 27% of respondents indicated other issues, including stabilization of prices, reduction of corruption, construction boom, etc. (see Fig. 7). 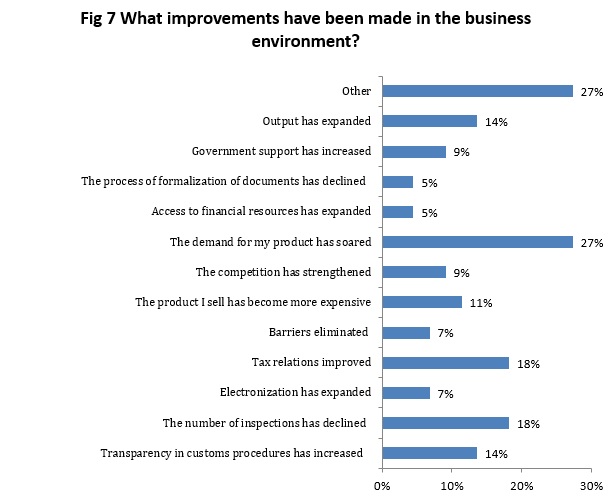 The entrepreneurs surveyed also pointed to a negative side, along with positive aspects, indicating a number of factors causing the deteriorating business environment, with the main problem being a decline in the number of customers (85%) due to the deterioration of the purchasing power of the population. Respondents also reasoned the rise in prices on the market (55%) and the soaring prices of raw materials (45%) as the main deterioration. The percentage of respondents with the responses – The difficulties with customs procedures, tightening of competition, cheapening of the products they sell to consumers and increase in competitors in the market were the same (20%), while 15% stated that their staffing potential worsened due to layoffs. Every 10th respondent expressed concern over increased monopoly, costs, tax burden and market shrinkage. Respondents pointed to, among other factors, the reduction in goods imports, difficulties in obtaining a license, an increase in the number of obstacles, difficulty with access to foreign markets, etc. (see Fig 8). 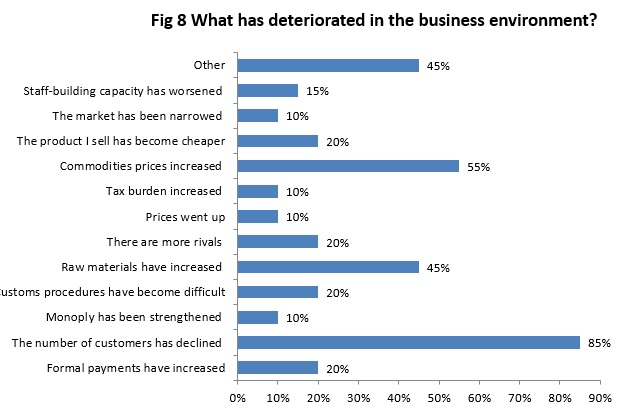 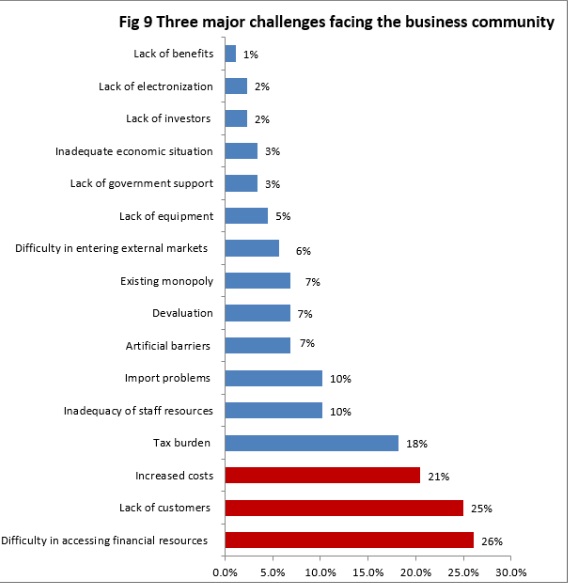 Businesses surveyed were asked to specify three important issues in order to expand their business. Their responses were as following: improving access to financial resources (38%), reducing costs (17%) and reducing tax burden (17%), applying the latest technologies (15%), strengthening human capacity (14%), and increasing the number of customers and government support  (13%) (see Fig 10). 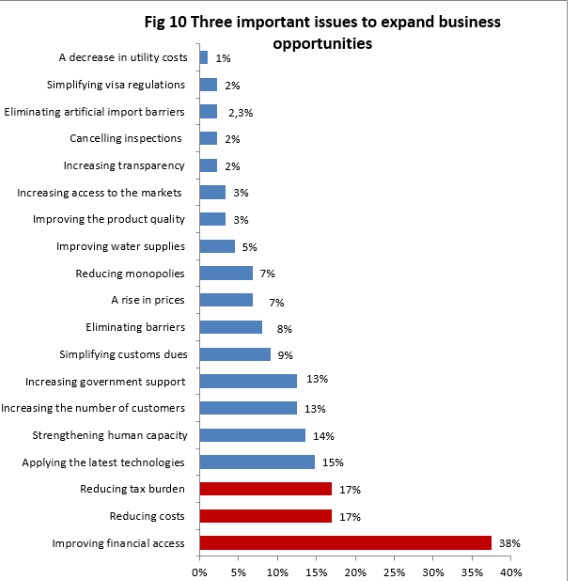 To the question regarding expectations in the coming six months, more than half of respondents surveyed (57%) said that they are going to expand their business, while about a third of those reported no changes in their expectations. Besides, 9% of businesses surveyed said that they will shift to another sphere and 2% will axe employment. Only 1% of respondents reported shutting down their business (see Fig 11). 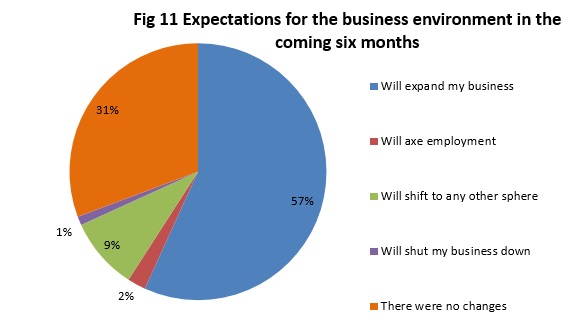 14% of respondents expecting improvements reasoned their findings on increased government support, while 18% on sales volume increases, 16% on tax burden decline, and 6% on monopoly elimination and infrastructure improvement. Besides, only 2% of respondents as positive changes reported the simplification of tax procedures and visa regulations, the decline in the number of inspections, as well as e-service and law improvements. And 22% of respondents specified other factors, whereas 8% failed to report what improvements had been made (see Fig 13). 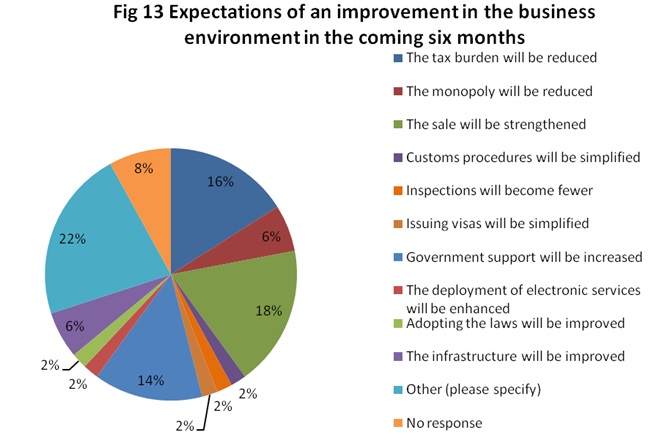 To the question “What do you expect the business environment will suffer most in the coming six months?”, 33% of respondents surveyed think that goods and materials are going to get more expensive, while the national currency will be devaluated and the number of customers will be diminished, with some expecting weak goods imports and fuel price increases.

Key results of the survey

Inflation is one of the crucial fundamentals of an economy. It is vital to have...

The Number of “Wrong Historians”...

By Dmitry Dubrovsky Government repression of “wrong” history is on the rise. In its place,...

It is known that macroeconomic data in Azerbaijan has its own characteristics, reliability being the...

Why Is It Impossible To...

It is easy to measure the quantity of housing in Azerbaijan because, according to the...

Scope and Opportunities in Social...

The challenges facing our world, including environmental, technological and demographic changes, plus rapidly changing labor...

Some methodological elements of the...

The subject of the research Turkey’s foreign policy has recently become increasingly ambitious in...

In the 120-year-old Azerbaijani cinema, in contrast to women’s issues, male heroes as well as...

The final version of this article has been published in English as a book chapter...

Democracy or Epistocracy? A Choice...

In the previous article named Importance of Voter Competence in Democracy, I discussed the dangers...