Can the Development Model of Circular Economics Save Us From the Economic and Environmental Crisis?

We definitely live in the anthropocene. That is to say that due to steady economic growth, nature is subject to human domination and influence, resulting in global climate change, as well as the socio-economic inequality we see today. Starting from 2013, global corporations, state and public (non-governmental) organizations have been proposing a circular economic model to overcome the devastating effects of the linear economy (take-make-waste). This model proposes a waste-free economy based on the principle of repair and reuse.[1] According to the model, all parties will benefit from such economic relations (society-nature-business) and this will have a positive impact on economic growth. The excitement around the model in academia and business circles has led to the adoption of political directives by the European Union, the African Union and China. Supporters of the model are convinced that circularity will bring about sustainable development not only for developed countries, but also for emerging economies.[2]

The circular economic model, however, like the linear economic model which preceded it, is focused primarily on economic growth and does not take into account the fact that nature is exhausted. Even in the initial reports, new opportunities and markets are promised for model businesses and large corporations. Naturally, the circular economic model can be regarded as a significant attempt to move a linear economy to a more sustainable economy. But this model will help to depoliticize economic-growth-based capitalism (thus avoiding the dispute over economic inequality) and to maintain a quantitative model of development.

What is a circular economy? 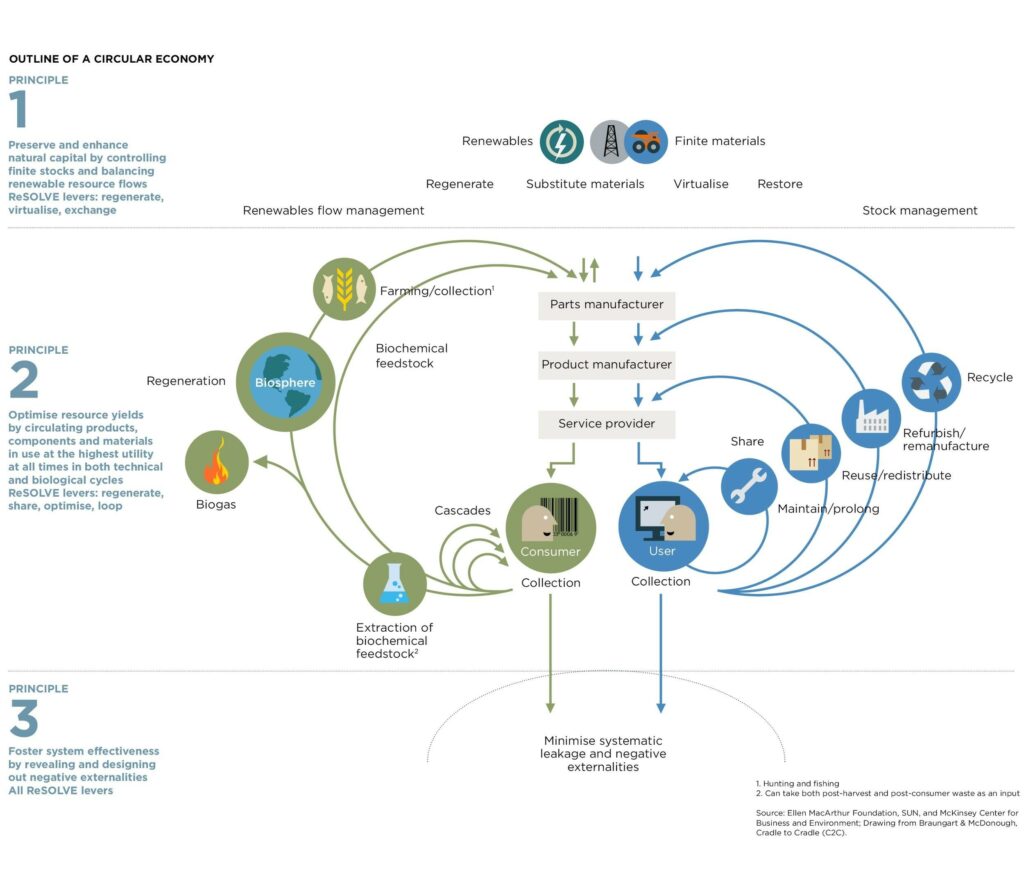 The circular economy aims to reduce waste by trying to maximize the use of resources. The Ellen MacArthur Foundation, a UK-based organization which helped to develop circularity, tries to integrate the model’s biological and technical circulation into the operational principles of business.  For example, as there is no waste in nature, and waste actually nourishes other living things or provides raw material for production, this principle can also be applied to production to make it waste-free. The diagram above outlines the system. The second key principle is to obtain the energy required for production from sustainable and renewable sources (solar, hydro, wind, biomass, geothermal). As the third and most important principle, the circular economic model proposes systemic thinking. That is to say that production should be systemic along the entire value chain, aiming to eliminate waste from the design of products and services to their sale and delivery, and to recycle used products. This can be achieved through long-lasting, sustainable design, repairs, and recycling. Based on these principles, tactical (products), operational (processes) and strategic (organizational) solutions have been developed for the construction, nutrition, logistics, textile, and plastic industries. In addition to non-governmental organizations and state agencies, global corporations such as Philips, Coca Cola, Cisco, Unilever, and Apple have adopted these principles at various levels. One of the key issues in the model is the creation of an alternative consumer culture. In the circular economy, we will no longer buy our products, we will use them temporarily. For example, a customer will pay for light, but not the light fixture, while the company will be the owner of the lighting equipment and pay the electricity bill. The product turns into a service and incentivizes these businesses to improve product life and recycling.

Is the circular economic model really the hero we need but not the one we deserve?

At first glance, this model seems favorable for all parties. The main reason for global corporations’ support of circularity, however, is the model’s promise of sustainable economic growth and greater production. The model assumes that long-term economic growth can be sustainable without taking into account the limited resources of nature, and the circular economy concept combines economic growth with sustainability. In other words, it means the production of more machines, more microchips, and more buildings. The EU, for example, emphasizes that the circular economy will provide sustainable economic growth. But the continuation of rapid economic growth means an increase in waste and energy use as well. Over the past century, the use of resources has increased 1400% (from 7 gigatons in 1900 to 62 gigatons in 2005 and 78 gigatons in 2010). This means an average annual increase of 3%.[3]

First of all, continuous growth makes it difficult to implement circularity, since even if all materials were recycled and recycling were 100% efficient, the amount of raw materials required for growth would exceed the amount of used materials that can be recycled. To compensate for this, we must continuously use more resources. The difference between supply and demand requires a more responsible use of resources and a change in the policy of continuous economic growth. Given the fact that most resources can be recycled and reused at 71% at most, the circular economic model can only be achieved by reducing overall use. We will have to use less fossil fuels and fewer raw materials. Most importantly, we have to produce fewer cars, microchips, and buildings. This will allow us to use resources for longer periods and to recycle raw materials. Supporters of post-growth economic thought point out that this economic model is already functioning.[4] Currently operating corporate sales networks or businesses based on social entrepreneurship models are examples of the feasibility of non-profit businesses and production.[5]

Secondly, the principles and mechanisms of the circular economy have been developed by global corporations (led by the World Economic Forum), in many cases minimizing the participation of citizens and civil societies, small and medium-sized businesses (which account for 98.7% of the EU’s economic activity), universities and research institutes. For example, we can clearly see that global corporations dominate the leading decision-making platforms, such as PACE, the World Circular Economic Forum, and the EU Circular Economic Partnership Forum, while other stakeholders are not represented. This imbalance has meant that implementation of the model has not been based on scientific research (e.g. recent research in industrial ecology shows that circular economic activity does not reduce the initial production cycle, but rather increases overall production – the return effect)[6] or civic (public) participation and in circular economics the question of the role of local communities and citizens (not as consumers) remains open.

Thirdly, by depoliticizing sustainable development, the circular economic model has left in the shadows problems of inclusivity brought to the fore by economic and global problems but unaddressed by circular economics, i.e. complex socio-economic issues such as migration, inequality, and poverty. Circularity claims that economic and environmental problems can be resolved through a technical engineering approach, and since we live in a time when the production chain is global, it proposes no solutions to how states can can eliminate or at least prevent from growing internal and interstate economic and social inequality (recognizing that inequality is a consequence of linear, growth economics). Obviously, the strategy is to attract more global corporations and create opportunities for businesses. For this reason, a recent systematic review of the academic literature on circular economics reveals a significant gap in this area.[7] Current academic and political discourse largely focuses on business models, cleaner manufacturing approaches, and productivity optimization. Very few recent studies take into account the social and institutional implementation of the model.

In addition, emerging economies attempting to enter a new stage of industrialization are excluded from these decision-making processes. As I mentioned earlier, developing countries are sometimes more circular. For example, in emerging economies such as Azerbaijan, Colombia and Nigeria, thanks to practices of repair and reuse, products are not thrown away when they lose their functionality, first they are taken for repairs. Or, for example, when people buy milk from a local producer, it is poured into long-lasting glass bottles rather than plastic. These circular economic practices can be listed and the same picture can be observed in the economic relations of the majority of countries on the lower and middle rungs of the industrialization ladder. But these practices are merely tactics of circularity. In reality, these economies are striving towards industrialization (ecologically unsustainable) and economic growth. Also, in many of these countries there are no regulations regarding even minimal environmental demands (e.g., carbon emissions). In this case, there is a need for local studies of the implementation of circularity in developing and emerging economies as well as the value chain.

Circular economics can contribute to the emergence of a new economic system (a post-growth and post-neo-liberal economy). Generally, the circularity principle offers the promise of being freed from linear economics. But in order for this model to really flourish and be implemented, it must first be inclusive, i.e. it must ensure the participation of citizens and civil society, small and medium-sized businesses, universities and researchers. In addition, it is equally important conceptually to integrate social and economic problems such as migration, poverty, and inequality, and change of our approach to continuous economic growth and consumer culture.[8] The main goal of such community-based movements should be the creation of a more sustainable and quantitative-growth-based economy, not through the disappearance of global corporations, but through the formation of more local and regional community-based consumer models. Circularity will become a more realistic economic model when implemented in this holistic framework. Along these lines, as a first step, a more inclusive Circular Economics 2.0 model (helping to achieve the UN’s Sustainable Development Goals) has been proposed.

[1] “Unleashing the Power of the Circular Economy”, report by IMSA Amsterdam for Circle Economy, 2013, https://mvonederland.nl/system/files/media/unleashing_the_power_of_the_circular_economy-circle_economy.pdf

[3] “Against wasted politics: A critique of the circular economy,” F. Valenzuela and S. Bohm, Journal of Theory & Politics in Organization, Volume 17 (1), 2017

[4] “A not-for-profit world beyond capitalism and economic growth?” J. Hinton and D. Maclurcan, Journal of Theory & Politics in Organization, Volume 17 (1), 2017

[8] What’s Mine is Yours: How Collaborative Consumption is Changing the Way We Live, Botsman, R , New York: Harper Business, 2010 https://www.economist.com/business/2017/09/30/a-right-to-repair-movement-tools-up

Vector-Autoregressive Analysis of the Exchange...

The decision of the Central Bank to close 4 banks raised again the issue of...

Why does Azerbaijan’s score on...

The Open Budget Survey 2017 full report that includes 115 countries across the world was...

Much Ado About Nothing

Over a year ago, it was first reported that a new reform of the rules...

The creation of the common...

Why is it important to...

Regardless of whether or not the elections are free and fair, it is important for...

According to the World Bank's report The Changing Wealth of Nations, human capital accounts for...

In summer 2020, the foreign policy advisor to the President of Azerbaijan held a series...

A Response to Murad İsmayilov's...

In an opinion concerning the recent radicalization of Muslims and the emergence of the Islamic...

The Impact of Oil Price...

In the contemporary industrialized world, crude oil is still essential for economic development. Yet countries...

In Azerbaijan, over the past 15 years, a total of more than 80 billion USD...