The Effect of Declining Oil Revenues on Household Income in Azerbaijan

Changes in household savings, and in nominal and real income

In assessing real changes in standards of living, it is very important to regularly monitor key trends in the dynamics and structure of household income. It is especially critical to conduct comparative analysis of the period of large oil revenues between 2005-2014 with the period between 2015-2017, when Azerbaijan experienced deep economic crisis and exhausted financial resources due to the abrupt decline in oil prices.

The Analysis of nominal and real income

Dynamics of nominal and real household income and inflation

The figure clearly shows that the growth rate of nominal household income was quite high fluctuating between 7.4-22.2 percent during 2005-2013. Low inflation rate during that period also contributed to the real income growth rate ranging from 5 percent to 12.6 percent.

However, the sharp decline in oil prices starting from the second half of 2014 had a negative effect on the economic indicators, including real household income in Azerbaijan that is highly dependent on natural resources. According to the official statistics of 2014, the growth rate of nominal and real household income was the lowest within the last 10 years, with nominal income and real income growing at 5.1 percent and 3.7 percent, respectively.

With annual inflation rate reaching two digits and exceeding the nominal household income growth rate in 2016-2017, real income started declining for the first time in almost 20 years. Thus, as a result of the inflation rate reaching 12.5-13 percent as opposed to 8.3-8.7 percent increase in nominal income, the real household income declined 3.7 and 4.7 percent in 2016 and 2017 respectively.

If we take a look at the period after 2005, we can clearly observe that the major change in the household income structure is the decline of wages as part of the income.

Dynamics of the changes in the household income structure 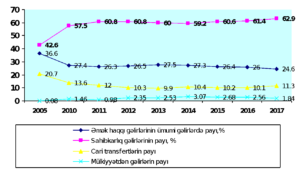 As you can see in the diagram, the wage share of household income has been declining for the past 12 years from 36.6 to 24.6 percent. As a comparison, the share of wages in many developed countries is around 60-65 percent of household income. The reason for this ratio being twice as low in Azerbaijan as in developed countries is the limited jobs with base salary, as well as the lower share of wages in the surplus value.

We observe the same trend in current transfers. According to the international standards on national accounts systems, current transfers include various payments for the social protection of the population, such as pension, benefits, social security. Current transfers comprised 20.7 percent of total household income in 2005, while in 2017 this number was only 11.3 percent.

According to the official statistics, the biggest proportion (almost 60 percent) of household income comes from entrepreneurial activities. While in 2005 entrepreneurship contributed to 42.6 percent of income, in 2017 this number increased to 62.9 percent. Comparative statistical analysis of household income in different countries shows that in countries with highly developed market relations and entrepreneurship, share of entrepreneurial income in household income does not comprise more than 10-15 percent. The reason this number is higher in Azerbaijan, in comparison with developed countries is because mixed income is not accurately recorded in national account systems, official unemployment level is low, and the level of illegal wage-work sector is high.

Lastly, there has been an increase in the share of property income as part of the total household income. International statistics of the national accounts systems show that property income included income from the financial assets, which include deposits, stocks, interest income on debt securities, dividends, etc. Between 2005-2014 share of income from these sources increased from 0.08 to 3.1 percent, however in 2015 that number started to decline and in 2017 was 1.84 percent. Two main reasons contributed to this decline: 1) the amount of household deposits decreased. In 2017 household deposits decreased 20.2 percent or 1.9 billion manats relative to 2015; 2) As a result of  decline in the value of the national currency, the population made foreign currency deposits with lower interest rates (2-3 percent). In 2014, 62 percent of household deposits were held in manats, while in 2017 that number decreased to 33 percent. In other words, before devaluation, 62 of 100 manats were deposited with interest rate of 10 percent or higher, whereas in 2017 only 33 out of 100 manats were deposited at that rate.

When real household income decreases, decline in household savings becomes inevitable. According to the national accounts statistics, savings is possible when disposable income (take-home income after taxes and other mandatory expenses are deducted) exceeds consumer spending. If a household has the potential to save, with these savings they can increase both financial and non-financial assets. Financial assets include investment in precious stones, deposits, equity and debt securities as well as pension funds, whereas non-financial assets are mostly comprised of investments in real estate and cars.

However, there are two conflicting trends in the official statistical sources on the savings dynamics in Azerbaijan. According to the statistics on the standard of living, although as a result of devaluation and low oil prices household savings as well as the financial and non-financial savings decreased, to some degree, it was still possible to save and make investments.

Changes in the amount of savings and investment 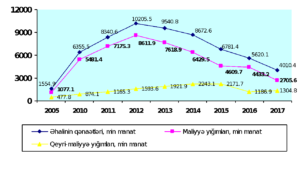 According to this diagram, prepared based on the statistical facts on the standards of living, household savings increased rapidly and total annual savings of the population went from 1.555 billion to 10.205 billion manats between 2005-2012. The information in the graph above suggests that since during that same period inflation was low and nominal income growth rate was quite high, increase in savings was natural. However in later years, especially during 2015-2017 household savings decreased substantially. For example, total savings amount in 2017 (4 billion manats) was almost 2.5 times lower than its peak level in 2012 (10.2 billion manats). Moreover during 2005-2012, as a result of increased savings, the value of financial assets also increased from 1.0777 billion manats to 8.6 billion manats. However, in 2017 financial assets decreased 3.5 times from the peak level to 2.7 billion manats. The most rapid decline in the value of financial assets happened after 2014. Decline in the non-financial assets was relatively moderate, so that, they increased fivefold between 2005 and 2014, reaching 3.2 billion manats, but decreased 41 percent to 1.3 billion manats in 2017.
Another interesting information that can be extracted from these statistics is that financial assets comprise a bigger share of household savings. For example, in 2010-2013, 80-87 percent, in 2014-2017 67-75 percent of savings were invested in financial assets.
However, national account statistics show a different picture. The latest national accounts statistics to date are those of 2015. That is the year when national currency drastically devalued, and the price of crude oil decreased twofold in comparison with the previous year. The national accounts statistics suggest that household final consumption expenditure exceeded disposable income by 795 million manats and thus resulted in negative savings. According to the international statistics on national accounts, negative savings means that household is unable to save and either uses previous year’s savings or borrows money to cover final consumption expenditures.
In fact, official statistics show that decreasing real income, which is the result of household nominal income growth rate lacking behind inflation growth rate, eliminates the possibility of saving.

With the lack of alternative and independent calculations, the only source showing the real effect of declining oil revenue and devaluation on household income is the national account statistics

This article analyzes the transparency and accountability of Azerbaijan's COVID-19 expenditures. The module on COVID-19...

The Number of “Wrong Historians”...

By Dmitry Dubrovsky Government repression of “wrong” history is on the rise. In its place,...

Protest Dynamics in Azerbaijan and...

We can easily anticipate what would await political opposition groups if they were to attempt...

Among economists, it is common practice to compare and contrast economic crises, and to try...

Post-War Messages from Azerbaijan: A...

An earlier version of this paper was presented during a webinar for ADA University Students,...

Kazakhstan: How the Transition of...

Transitions of power are never easy in authoritarian, autocratic and corrupt regimes. A single person...

Azerbaijan is an oil-dependent economy. Although exchange rate is fixed with a non-floating exchange rate,...